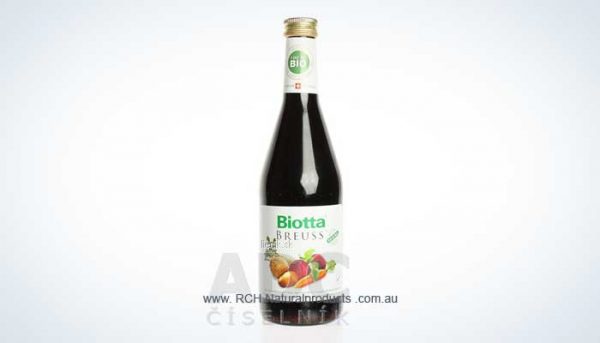 Of all the organic vegetable juices produced by Biotta, only the Breuss Vegetable Juice was named after the Austrian healer Rudolf Breuss. Behind the name is an extraordinary story of this humble and very gifted man who was born in 1899 and died in 1991.

When in his forties, Breuss read a German book written four hundred years earlier, which captured his attention and directed his work for the rest of his life. The book expounded the value of vegetable juices for body detoxification.

Breuss had much experience with juice fasting and designed a vegetable juice recipe which, together with certain herb teas, provided enough nourishment to meet the body’s basic requirements during a six week juice fast. The ultimate result was a mixture of vegetable juices comprising organically-grown beetroot, carrot, celeriac, potato and Chinese radish.

In the early days Breuss prepared the juices himself, but to obtain all the vegetables from organic sources proved difficult until Breuss approached the Biotta company in Tgerwilen, Switzerland. They made the juice exactly as he wanted it, using their tried and tested method of preserving the life force in the juices, making all Biotta juices extremely beneficial.

Organically-grown vegetables are widely acknowledged as having greater nutritional value than those produced using chemical fertilisers and pesticides. All Biotta ingredients are grown on Biotta’s own farms and monitored by BioSuisse, an independent organic certification agency.

Biotta’s Breuss Vegetable Juice is an effective digestive regulator with wonderful nourishing and purifying qualities. It forms the basis of the world-famous Breuss 21 and 42 day body detoxification programs.